On January 1 of this year (2019) we had a very unusual visitor show up at the Whalon Lake Forest Preserve near my house west of Chicago. I understand from a fellow birder that the woman who discovered it was too afraid to report it because no one would believe it, so another birder reported it. But she was right, and we were pleased to host a Black-legged Kittiwake for a few days!

Black-legged Kittiwakes (“wake” is pronounced like an ocean wake) are common in northern coasts, but they winter out to sea (note the January 1 date here). In fact, Audubon says the bird is

Chiefly oceanic. Spends most of year at sea, with wide range of conditions, from edge of pack ice to moderately warm waters off Baja. Favors areas of upwellings, and sometimes concentrates over edge of continental shelf, but may occur from coast to hundreds of miles out.

Note that they don’t say to hundreds of miles in. If I may borrow the range map from the Cornell site: 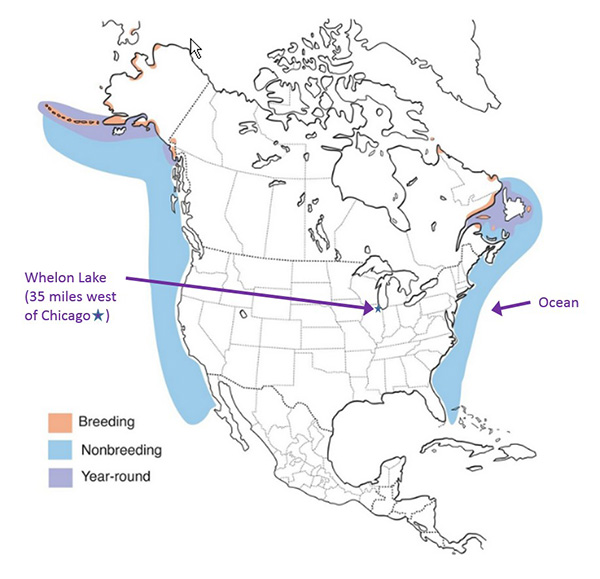 Now I know from my daughter that this is a revelation to people living in Southern California, but Chicago is well into the interior of the country, so the appearance of this bird is probably equivalent to an albatross landing in my backyard. Perhaps it followed the St. Lawrence River down through the Great Lakes. It attracted many birders from all around and stayed until January 6, leaving exactly one hour before my brother Brian arrived from driving 2-1/2 hours to get photos of it. (I seriously feel really bad about this.)

Rather than its usual resting place sitting on the water with Mergansers, the Kittiwake was flying around the small lake when I went to take pics of it, even flying over the heads of our group of birders. (Click to see larger images.)

It’s actually a pretty bird, for a gull. These pics were taken near sunset, which darkened the bird’s feathers a bit in the flying shots. The later shots on the water show the true whiteness of the feathers.

The defining characteristics of the Black-legged Kittiwake are nasal “ki-ti-waak” callnotes (which I did not hear), a small yellow bill, a white head and underparts, a black smudge at the ears for non-breeding adults, a gray back, wingtips “dipped in black ink” without white spots like other gulls, and of course, short black legs that can be just barely seen in the photo above. I also found out from other assembled birders, and discovered this to be true, that they beat their wings faster than, say, Herring Gulls.

They can dip or dive in flight to catch fish, preferably, or they can catch fish while swimming. I was standing next to another birder with his scope when the Kittiwake flew toward us, so I stepped backward with my camera to catch it after it cleared the birder, when suddenly it dropped in the water right in front of us! However, because I had stepped backward the wooden railing of the dock blocked the lower half of the bird!! I was off-balance (I know this is a thrilling story) but I leaned forward taking pictures anyway. The photo below has a brown cast along the bottom because that was the out-of-focus wooden railing, and it was all I could do in post-processing to minimize the effects with tone enhancement and vignetting.

I managed to move another step forward before the Kittiwake took off and managed to get a shot of the definitive black legs. It looks pretty happy after eating the fish.

This encounter was a nice antidote to missing a rare Red-Throated Loon several weeks earlier at the exact same location by just minutes because I grabbed a hamburger at McDonald’s on the way. I’m sure my brother feels sorry for me about that.