A rookery is a colony of breeding birds. Often these are man-made, and these can look like the exposed superstructure of a huge sunken pirate ship, teeming with herons, cormorants and egrets. Others are natural collections of large nests at the top of tall trees, attracting the same types of birds. I like the natural rookeries much more, and on March 20, 2016, I took some photos of Great Blue Herons at a natural “heronry” in the Danada Forest Preserve in Wheaton, Illinois. There were about 12-15 nests at the time, every one in use.

Great Blue Herons are incredibly impressive birds. They really seem almost prehistoric, especially when they emit their surprisingly guttural calls. These can be very loud, and in a twilight setting they can be eerily haunting.

Here is one pair at the rookery:

Per the Cornell site, the male collects the sticks for the nest that is usually high in a tree, while the female weaves a platform and nest cup, the whole project taking up to three weeks to complete. The clutch consists of 2-6 eggs with an incubation period of 27-29 days. From what I have observed, I would say that both genders are very attentive parents.

By the way, those feathers on their chest, called powder down, continually grow and fray away. They comb these feathers with a fringed claw on their middle toes, removing fish slime and oils from their other feathers as they preen (“like a washcloth,” as Cornell puts it).

And did I mention they can look prehistoric? 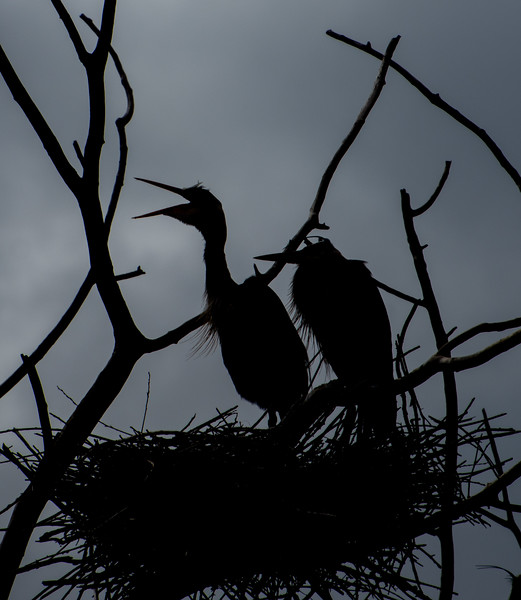 These nesting photos were taken at this location: